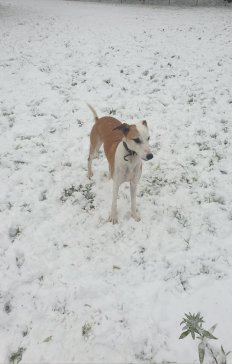 2020 was a difficult year to love, as you may have noticed, and thus far 2021 isn’t shaping up to be much of a giggle, either. As I discovered shortly before Christmas, you can’t even try and do something nice, such as visit your old dear to reminisce about Christmases past over Gold Blend and shortbread fingers, without someone driving their fucking car through the garden wall. I use the word ‘driving’ generously, because there was no one actually in the car at the time. The owner appeared a few moments later, with the happy-go-lucky explanation it wasn’t really her fault. I mused aloud that it must be someone’s fault, because her ‘…Ford Focus isn’t fucking Herbie, is it?’, referencing a self-driving Volkswagon from an obscure cinema franchise that I had forgotten about until that moment. What had happened, she said, was this: she had parked and nipped into the shop, but the car’s handbrake had then disengaged itself, causing it to reverse out from between two other cars and down a hill, whereupon it turned right and mounted the pavement, before 9/11-ing my old dear’s garden. I said that seeing that as this was obviously a miracle, we should leave the car where it is and charge people to touch it for good luck. With the concept of plausibility looking on in stunned silence, she drove out of the garden again. I offered directions in case she wanted to finish the job by parking in the kitchen, but there was no further calamity.

The incident raised the ethical question of whether calling the insurance people counted as snitching – something that, to say the least of it, we frown upon in our family. Back in the living room, we weighed the evidence. By way of opening remarks, I suggested that having insurance in the first place could be considered Intent to Snitch and that, if my old dear hadn’t been looking over her shoulder since taking the policy out, she is already at ease with snitching as a concept. Furthermore, if this was the case, she could no longer have Sid round after nursery, because I will not have a grass in the family. She countered with the assertion that insurance is for burst pipes and what not, and not people talking panicky nonsense about traffic accidents. I seized upon a compromise: I had asked the woman if there was ‘anything she wanted to tell me about’ off the record that might help us settle the matter between ourselves, instead of trying to play us for chumps. She had declined to do so, sticking to her story. Therefore, I concluded, we were snitching on the car for crashing itself, which is no worse than snitching on the pipe in my old dear’s example for bursting itself all over the upstairs landing. Satisfied, I set about ringing the insurance company which, I have discovered, is significantly more annoying than having a Ford Focus take out sixteen feet of garden wall. Happily, they are going to pay out, and everyone around here 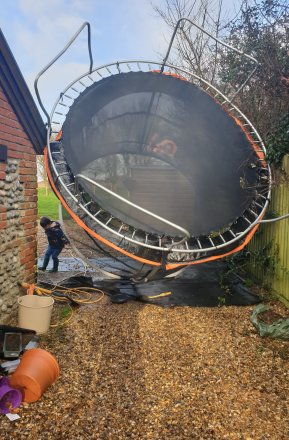 who isn’t a dog or a horse is a handyman of some description, so it should be alright.

Sid, and the several tons of Christmas presents my old dear had bought him, were the main focus of our pre-incident conversation, of course. He is growing fast and describes himself as ‘not a baby, but a tobbler’ when he is in fact a bona fide little man who can almost spell Christmas, despite his insistence that the middle part of the alphabet is ‘H I J K mellow mellow P’. This academic breakthrough was not enough to avert another tiny COVID Yuletide tragedy when, shortly after eight thirty in the evening of the 23rd, he thumped downstairs, hid under the dinner table and then, in a hysterical, gulping, sobbing, wailing outburst explained that he had ‘been up all night’ and missed Father Christmas because his bedroom doesn’t have a ‘…chin me for him to come down’. I explained that chimneys don’t really exist and that Father Christmas would come through the lean-to by the back door like everyone else. After half an hour of Elf he fell asleep reassured and, when Christmas finally arrived, had a lovely time.

The same cannot be said of many other residents of North Norfolk. Being remote, a tiny bit creepy, but undeniably glorious, it is a great place to forget about a world that often, in return, appears to have forgotten about it. It also showed itself to also be a great place for people from the nicer London boroughs to forget about how a virus is transmitted, as hundreds of them descended on the place in hastily-purchased luxury caravans, elevating the region from the lowest rate of infection in the country to the second highest, behind only London itself. There are now no functioning medical services within thirty miles of where I am sitting. Still, the incoming Bens and Lauras are right to blame the Government, as they assuredly will – like many of us, I was appalled when the Prime Minister told them to fuck off to the countryside and directly contribute to the deaths of vulnerable people by tactically annihilating the NHS they are so fond of banging on about. Flashing blue lights now regularly illuminate Sid’s bedroom at night, and he likes to count the ambulances, more common than agricultural machinery –

which is very common indeed – as they trawl up and down the inland road. I’ve never been entirely convinced by the general coronavirus narrative, but something out there is certainly happening, and happening often. I feel like someone in Pompeii looking on curiously as the first specks of ash begin to gather on the roof.

Chin up, though. I have volunteered to cycle around the frozen lanes delivering medicines and such to the elderly and isolated, and feel that I am, in a small way, fighting back. ‘Elderly and isolated’ does not necessarily equal vulnerable, incidentally. I discovered this via a lady who has lived in the same house for 87 years and refuses any help whatsoever, including me delivering her medicine. I offered to throw it into the garden so she could find it herself, explaining that I do this with the dog and a chicken leg sometimes and he loves it. After some to-ing and fro-ing, we agreed that I would leave it just outside her garden gate so technically she is still getting it herself, but won’t risk renal failure trying to fish it out of her pond, and she agreed that yes, this was a good compromise, and that I was a very clever young man. This was on New Year’s Eve, and to see 2020 off I drank two bottles of rioja in front of Withnail and I, which seemed appropriate. With the first days of 2021 annoying almost everyone, I have been heartened by the actions of Suffield Park post office, whose employees refuse to take down their enormous Christmas tree and the strings of fairy lights criss-crossing the road outside because ‘…it’s something a bit bloody cheerful’. And yes, it is. It looks really nice. Well done. We should all do it.

Top inset: Dog in snow. Considering he belongs to a breed intended to chase animals across the Egyptian Sahara until they collapse, he is surprisingly delighted by snow.

Middle inset: Can’t even keep an extremely heavy jumpoline at the end of the garden without a freak coastal storm almost demolishing the house with it these days.

Lower inset: Sid and my old dear, before the Pestilence.