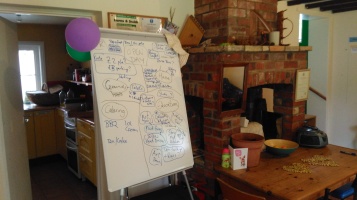 One of the Runton outbuildings I should like to demolish using the power of middle class angst – which you may recall we discovered how to harness last time – is a disused pigeon loft. The field where it is gently collapsing would be ideal as a second glamping area, which would in turn raise the possibility that Runton could host small events – literary fairs, dogging, public executions, that sort of thing. From what I ascertain among obscure paragraphs in dusty books in the Big House*, the loft was in use until the 1970s, when Runton fell into the nosedive from which Joe, Becka, ‘Anton’ and myself are now trying to wrestle it. Over the last few days, Joe has been tied up constructing improved fencing around the fucking petting zoo, while Becka is at Folk East. The Guardian Festival Guide rates Folk East among the ‘…top 10 folk, roots, world and acoustic festivals’, and we must hope for her safe return, because everyone who attends is, as you might expect, immediately executed. Still, ‘Anton’ and I are firmly in charge of glamping operations these days, so it has fallen to us to poke about and decide what to do.

Thus it was that we found ourselves in a field last Wednesday, perusing a small ruined building with Archie bouncing and thrashing around the long grass thereabouts. The field, or ‘East Field’ if we’re going to get fiddly about it, needs considerable sorting o

ut and fencing in, and Archie was invisible except when leaping above the grass like a delighted salmon to make sure we were still alive and as magnificent as he remembered, thirty seconds previously. The loft itself is roughly the size of three domestic garages joined together, and in its day could house two hundred racing pigeons, or four terrifying non-racing ones. That’s history now though, and the interior is dark, damp, mildewed, and exactly the sort of place you’d expect to find porn in a carrier bag. Using this last premise, I was able to persuade ‘Anton’ to go inside and have a rummage around.

Coincidentally, the last time I had anything to do with porn was also with ‘Anton’, during our trading days at Greenwich Market. At the height of the marathon feud between himself and Keith (a fat photographer in his fifties) it was his habit to place copies of Razzle in the large portfolio bags that Keith would take to galleries interested in exhibiting his work. The effect of this is unknown, but he once secured a six-week residency at the Hayward Gallery by – according to ‘Anton’ – agreeing to ‘put on a blonde wig and flick off Mehmet the security guard in the disabled toilet every day at three o’clock’, a story that, despite its rich narrative detail, is probably untrue. Incidentally, my avoidance of Frankie Vaughan** is in line with a discussion in a copy of Marie Clair I noticed in my dentist’s waiting room this morning, while awaiting the replacement of several hundred pounds’ worth of dental implants that skittered irretrievably across the tarmac during the Tennyson Road Incident. It was the current edition of Marie Clair (I have a good dentist) and, ironically the kind of thing you could probably stab the cat over quite happily, in an emergency.

Main: Marquee used for the second of the two weddings at Runton this year, which I missed due to hospitalisation. Norfolk Seventies tribute band Saturday Night Feverishness once again played for the delight of guests. I understand they said ‘Is this Runton? Or Funkton?’ at one point. I shall be putting them very straight about that next time I see them.

Top inset: Outside the kitchen in the Keeper’s Cottage (essentially the back of the Old Servants’ Quarters), featuring a Forest School plan of action. Quite an exciting one, if the balloons and different coloured pens are anything to go by.

Middle inset: The Old Servant’s Quarters, taken while leaning slightly backwards. As I write, there are eight Flat Earthers, a Buddhist of some kind and a new yoga lady in there, who last week held classes wearing sunglasses to hide the aftermath of surgery to have her eye bags removed. She also habitually holds classes while steaming drunk, which is something I have to see.

Lower inset: A whole evening of Frankie Vaughan, at the Birmingham Hippodrome if you please. Is nothing sacred?

*Runton Hall itself, still a residential property and off limits to everyone except by special permission, or when Joe goes in for the Monday morning Trustees’ meeting.

***This is plausible, but not true.